Peter, Jeff, Alex, Trish, and Gosia.    Jeff, Gosia, (and Natalie) took time off work to do some of the more intense installation dives, which helped tremendously.

With the term prep taking up everyone’s time, I almost forgot to post about the wonderful field season we had this summer.  We really covered the bases on this one: from surface loggers, to cave sensors, to new deployments out on the reef.  And there were plenty of new toys in the show, including a couple of “All hands on deck” days for the deployment  and retrieval of several POCIS (Polar Organic Chemical Integrative) samplers.

A dual MS5803 pressure sensor unit with the same cable & waterproof connectors I use on the DS18b20 chains.

Most of the new instrument deployments on this trip were DS18b20 temp chains and deep pressure loggers. While those under water units continue to give us great data, I’ve added a new model that can record water level with a  MS5803 pressure sensor at the end of a long cable.  That sensor has two selectable bus addresses, and I was very happy to discover that with one on the housing, (recording atmospheric pressure) and one on the end of an 18m cable, both sensors will read OK with 4K7 pull-ups if you lower the bus speed to 100 kHz.  Slowing things down to 50kHz (with TBWR=64; on my 8Mhz 3.3v loggers) let’s me extend that out to 25m, again with the default 4k7s. I’m sure you could stretch that even further with lower pull-up resistor values.  I honestly didn’t remember anything in the specs that said an unmodified I2C bus could be extended out to the kind of run lengths you usually see with one-wire sensors…

Peter did all the heavy lifting for the permeamters, including some late nights checking all the stations.

This opens up tide monitoring from  stations above water, and will let us capture some decent bore-hole records.   And since I mounted the pressure sensors inside threaded fitting, we could attach the them to a reservoir for other interesting experiments. What we actually used them for on this trip were falling-head permeameter tests.  One of Trish’s undergrad students planted a veritable forest of PVC tubes in locations all over the field area.   Though he built a couple of the loggers himself in the instrumentation course, it was interesting to see him working through all the other things it takes to run an experiment in the real world. Some of the limestone mounted tests took many days to run, as compared to the much shorter times you see with soil, or cement. So being able to let the data loggers record those slow level changes was a real help. 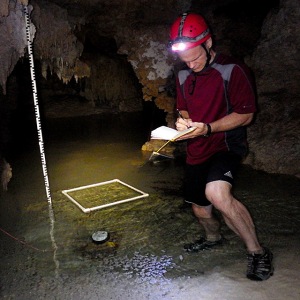 One of our older in-water level recorders, with the pressure sensors directly on the housing. This station has been in place since Kayleen recorded the big floods in 2013.

While he was out mixing cement & feeding mosquitos, our room turned into a rolling conveyer belt of incoming an outgoing loggers. With many of the drip logging stations approaching two years in service, I was expecting some attrition  in the set at Rio Secreto. To my surprise the majority of sensor failures were from the newest units installed last December. I had used more expensive Adafruit  breakouts for those builds (while the older drip loggers were built with $2 eBay boards) I’d love to say this is an anomaly, but after building & deploying more than a hundred of these things,  it seems that IC sensor longevity can be unpredictable, no matter where you buy them.  And we are not exactly treating them nicely…

As usual there was lots of great diving, and we even got back up to the north coast to replace those opportunistic mangrove deployments from the last trip. I still can’t get over how lucky I am to be able to see the diy loggers going out in the wild like this.  But for Trish, all this is just, you know, another day at the office…

Of course by the time we reach that point, my work is pretty much done. She’s the one who has to wrangle with all the data, and writing a good paper is a lot harder than building a few loggers…

Not that I need them at this point, but I just stumbled across some I2C extenders over at Sandbox electronics. They claim up to 300m with their differential extender.  Those NDIR CO2 sensors also look interesting, but with the caves over 95%RH for significant periods of time, there is some question  about whether those sensors would work. 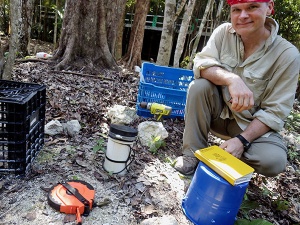 We finally got one of the dual 5803 units set up in an unused well. This has been on the to-do list since mid year, but as you might imagine, there are not that many wells that get drilled without being used right away, so we are very thankful to the land-owner.  Of course there is so much pumping going on in the general area, I have a niggling concern that what we will really be recording is the draw-down, rather than the level of the aquifer itself.