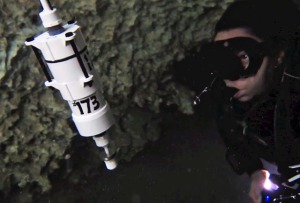 Early in 2011 it became clear that open-source micro controllers had the potential to replace expensive commercial sensor units with cheap  & cheerful DIY equivalents -provided someone was willing to dedicate the time.  In January 2014, we started a small blog recording the development of a simple water flow sensor using the Arduino platform. The project has grown since then, and those crude early attempts have been refined into a generic data logging platform which can be configured for many different  environmental monitoring applications.

The basic 3-module plan uses a  ‘lowest common denominator’ approach, and this means any component in the build, including the Arduino itself, can be changed to suit available parts without requiring a significant re-write of the code.  Our performance benchmark is at least one full year of operation on standard AA batteries. With this foundation, we are deploying sensor prototypes in wetlands, coastal waters and flooded caves; focusing on hydrology because of the crucial role water resources play in sustaining us, and connecting everything people do to the natural world. 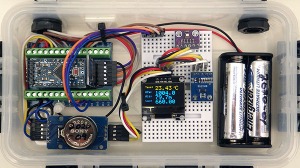 The 2020 iteration of our ‘Classroom datalogger’ can be assembled with minimal soldering.  Parts can be arranged to fit whatever housing you have available. Libraries make I2C sensor modules & screens (like the ones shown here) very easy to add to the base logger.

Anyone can learn to build something like this from scratch, and our hope is that this project is a useful contribution to the Makers movement; engaging people with environmental issues and giving them a chance to actively participate as citizen scientists.  So if you want to start a project of your own, you can go straight to the How to build a Datalogger page, or browse through our ongoing adventures from the place where it all started.  There have been many successes & many failures along the way, and I still learn something new every day…

52 thoughts on “About this Project”