Run times for Cave Pearl loggers without RTC pin power (0.25 mA) and with RTC pin powering (0.1mA). Dashed lines are projections to the point where the unit would have performed an automatic low-voltage shut down.

It’s been an intense year for the Cave Pearl Project, with several major advances. Almost all of the the units in the field sleep at 0.1mA or less with the RTC pin-power modification, so we can finally push the deployment cycle out to a two year rotation. Somehow I doubt that Trish will be able to wait that long for her data, but at least now we have the option of just leaving things in place if we need to when the fieldwork doesn’t go according to plan.

I also started experimenting with SD card shut-down this year, and early records from those prototypes are in, suggesting that they will run for at least four years. However I’m not going to call this technique ready for prime time until we see at least twenty units deliver more than a year of saved data.  Accelerated bench tests can only tell you so much about how a unit performs in the real world.

Extended lifespans mean that we can leave loggers with other people so they can do exploratory deployments in locations we can’t get to. Natalie Gibb from Under the Jungle sent us a brilliant video from one of those deployments:

We couldn’t have produced anything that polished with our hokey little point & shoot cameras! 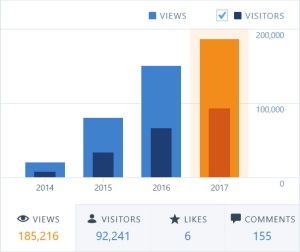 I didn’t have much time to update the site in 2017, but even with only six new tutorials the traffic continues to grow, and we are approaching 100,000 unique IP’s. I still consider this whole endeavor as an experiment, since we had no idea how much traffic a nerdy rant about DIY data loggers would get when we fired it up in 2014. I think we’ve passed some kind of threshold this year, because traffic analyzers are now hitting the site regularly, and the comments are being spammed with a heap of “monetize your blog” garbage. Are there really people out there willing to annoy that many people for a $2.50 average CPM? (Ok…rhetorical question…)

I mentioned in the 2016 review that European countries were occasionally passing the US in the daily stats. At the time I thought that this was just an artifact of some mention in a forum thread, but through 2017 it started happening more frequently and now the US traffic is really starting to fall off. This struck me as odd, given all chin wagging you hear about STEM education initiatives in the burbs.

So I did a some checking with Google Trends and it’s not my imagination; something happened in 2017 that reduced the number of searches for Arduino in the U.S. while those same searches are rising in the rest of the world. Sadly, I don’t think you have to look very far to understand what’s happening when the president states that dismantling “the DEP” is one of his goals, and then appoints a director that sued the agency several times to carry out that plan. The relationship between the executive branch and the research community is so deeply dysfunctional right now that the Center for Disease Control has been ordered not to use terms like “evidence-based” or “science-based” in official documents.  Is it possible that folks on the street are getting the message that science has somehow become un-American?

I’ve no doubt more will be written about this epic estrangement, and in keeping with the freaky zeitgeist we’re introducing the Cave Pearl Projects first annual “Ugliest Deployment of the Year” contest.  A worst-in-show collection of from coastal outflows, mangrove swamps and hydrogen sulfide pits:

To qualify, these dogs had to run through the entire deployment because without primary data to support your hypothesis – you’ve got nothing. (no matter what they look like on the outside…)  You can’t just wave your hand and create alternative data because in research that’s called lying.  Somehow, this not-so-subtle distinction has become blurred in the media, where science itself now seems to be under attack.  It’s remarkable that someone with a “natural instinct for science“, and an obvious facility with numbers could fail to appreciate how valuable the insights from research can be.

I’m genuinely concerned that if the the U.S. continues to turn inward, choosing a path towards declining health and social outcomes, it will become less appealing to the kind of entrepreneurs that built the country in the first place. The winners-take-all legislation rolling out of Washington these days threatens to eliminate the things that make risk-taking innovation possible.  An important nugget that policy wonks always seem to forget was eloquently summarized in Jennifer Romolini’s Career Advice article:

“You’ll Suck at Everything the First Time You Do It.
You will probably suck the second and third time too.
Don’t get defensive about this; don’t decide that you should never do the thing again…”

This was my first attempt to build a data logger, and yeah, it was pretty crude. I was lucky to get 24 hours on 6xAA batteries and it was held together with hot glue. My current builds are probably going to pass four years at 100-200 ft depth.   If I gave up when it still looked like this piece of junk on my kitchen table, I’d have no idea that was even possible.  Even today I get criticism from engineers who say the project is pointless because it’s not ‘state of the art’. But they don’t know where we started, so they also have no idea how far it will go. The same holds true for your project, whatever that might be.

But without a functioning a social support system, only people with rich parents ever get a second chance. It’s no surprise that bankers could care less about this, since they don’t have to produce anything new to make their money. But these days it seems that silicon valley is also willing to focus on corporate profits rather than innovation, even if that means looking the other way while legislators dismantle systems those propeller-heads needed when they were just starting out.  If people thought WannaCry was bad in 2017, just wait till they see what AT&T and Comcast does with the net neutrality rollback. (And they called the bill the “Internet Freedom Act”…nope…that’s not Orwellian at all… )

America will not succeed in the 21st century simply by making stuff cheaper with learning systems that remove human beings from the process.  If that does happen, who’s going to have enough money to buy the consumer goods that keep the economy rolling? But they could reclaim that edge by re-imagining how technologies interact with people and the environment. Of course, no one from old money will support policies that might upset the profitable status quo, so the last thing they want is an educated population changing things with a bunch of new ideas.

Unfortunately, the ‘new’ money created by the internet revolution is now acting like the old.  With few exceptions, the major tech players are willfully dropping the ball, spinning up proprietary bank crypto-currencies when they could be using tools like blockchain to build efficient resource allocation systems for new energy sectors that use considerably less water and create far more jobs. It’s time for the de facto stewards of the internet to accept responsibility for their creations, which are becoming the real arbiters of trust, fairness and justice in our society.  A good start along that path would be to make the voting system more secure from external threats, and from internal ones.

If the tech sector consolidates into a corporate platform oligopoly, scientists / inventors get lured away by countries 1/10th the size, congress bends the knee to carbon energy’s hired guns and big PhRMA’s lobbyists, then the US will essentially be handing the future to China.  But it does not have to be this way.  America seems primed for a democratic political awakening, and I hope that process encourages people to think about the role science, innovation and invention originally played in ‘Making America Great’, and then vote for leaders who help those things to flourish in the future: