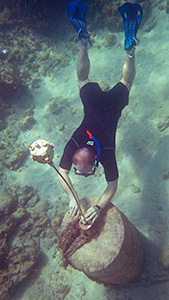 The B4 unit has been a star performer despite the fact that it was one of the earliest logger units I ever built. It has been running continuously since its first cave deployment in March 2014.

I was happy to see Gabriel from CEA the next morning to discuss retrieval of the open water units, but he delivered some unwelcome news to go with my morning coffee: the logger at the mouth of Yalku Lagoon had gone missing. Loosing the unit itself was irritating, but loosing four months worth of data – that hurts!  Another pivot joint on one of the loggers in the bay had failed the week before, and one of the reef volunteers spotted that unit while it was still hanging from the backup bungee. I received that news before we headed south so I had quickly crafted some stronger universal joints from pvc to fix the problem. It was salt in the wound to know that these new pivots were sitting in my suitcase, having arrived a day or so too late to save the Yalku unit. Darn!

Oh well, we can only try again, and there is some solace in the fact that we are not the only ones to see equipment suffering this fate.  There is still a small chance that someone will pick it up further down the beach, try to figure out what it is on Google, and send us an email to say they still have the SD card. From this point forward, I will be labeling the inside of my loggers as well as the outside, and I will add a little “If found please email…” blurb into the data files. 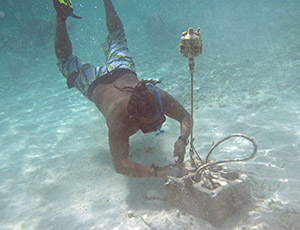 Marco cuts B3 from it’s mooring on the south side of the bay. Marco has been doing regular checks on the loggers since the beginning of the open water experiment.

Gabriel had meetings to attend, so Everett, Marco and I popped on some fins and swam out to recover the units in Akumal bay.  As usual they were covered with a crop of algae & other critters but both B4, and the B3 unit that I rebuilt on the last trip, were still running smoothly. The unit in shallow water was so encrusted that I told Marco to pull the whole assembly, including the anchor plate, because there was no way to inspect it through all the accumulated cruft. That bio-fouling likely increases the drag and the buoyancy of the meter over time. 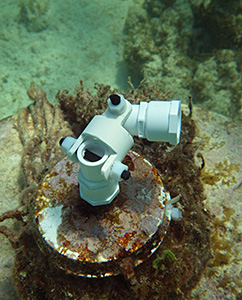 This is one of the new universal joints – hopefully robust enough to save us from more losses.

These two loggers have now been in the open ocean for seven months, and once ashore I began a familiar routine, cleaning them with green scrubby pads and copious amounts of rubbing alcohol.  The Loctite E-30CL epoxy on the LED’s is holding up well although the JB weld on one of the DS18b20 temperature sensors definitely has little patches of rust showing through. The stainless steel ballast washers appear to have fused together, but the O-rings are still looking good. The nylon bolts are sounding crunchy, perhaps indicating that they are starting to get brittle so I might replace them on the next round.  Now that the new pivot joints are more robust, I probably need to think about upgrading the rest of the connections as well. 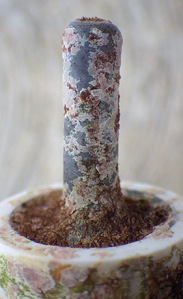 The JB weld on the DS18b20 sensors is getting a bit crusty.

Once the data was downloaded, I reset the RTC’s, and checked that the sleep currents were still the same as they were in December. These units have Tinyduino stacks, so they run with fairly high sleep currents. (around 0.7 mA) With six new AA’s in the power module they should still deliver 6-9 months of operation.  After adding a fresh desiccant pack they were sealed & ready to deploy with code that crops the highest and lowest off of 13 readings, spaced 8 seconds apart. I average the remaining 11 readings to filter out the high frequency wave turbulence, and get at the underlying flow direction. So far this approach seems to be working well.  I also gave Gabriel a new logger to replace the one we had lost at Yalku lagoon Hopefully the sea gods will smile upon this new deployment.