A couple of days into the UNAM research, there was break in the schedule, so we had the opportunity to go back and retrieve the units. When we arrived at the installation site, everything looked exactly as we had left it, with no apparent leaks or other damage to the housings.  But on closer inspection, we did observe that the two units were not exactly behaving the same way:

After catching a little more video, we spent a few minutes collecting the sensors. A short while later we finished the dive, and soon I was carefully cradling the loggers on my lap as we drove back to the CEA dorms. Once there I made sure that the units were absolutely dry before I opened them up to retrieve the SD cards.  I could see from the size of the files that both units ran smoothly, and had logged data. But what had they recorded?

Once the files were on the laptop, my wife, an Excel virtuoso, took over.  Within moments we were starting to see bumpy graphs displaying the three axes of the accelerometer.
A little more adjusting, a few labels, and we were looking at this: 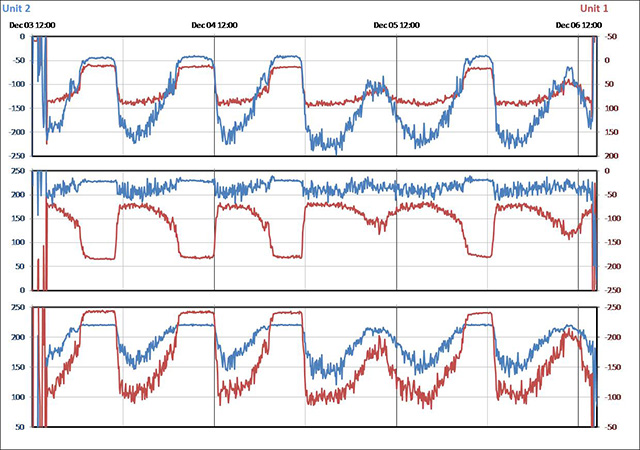 Raw data from the first deployment: x,y&z axes, but with different orientations relative to flow direction.

“Is that good?” I asked. I could barely contain my excitement.

“Yes,” she replied with a big smile, ” for uncalibrated, first run data, this is pretty good.”

“Why two peaks per day?” I thought there might be a problem with the sensors.

“Actually.” she added, “That’s normal.  This area has semi-diurnal tides, and the velocity curves are often asymmetrical like that.”

“Yaayyyy!” I whooped, “We did it!” And I think I even started dancing.  Months of noodling around in the basement, and combing through forums, had just been transformed from “another one of Ed’s crazy projects…” into two real working prototypes!

It was well into the evening by this point, so we headed out for a late dinner, and a couple of celebratory ‘cervezas’.  We discussed where we might put them next, so that we could learn more about the quality of the data they were generating. I wondered about how we might calibrate them against some commercial units, and Trish said that even without ‘absolute’ velocity numbers, the information would still be useful to her research. But for me,  the real bottom line was the moment when she asked:

“How soon can you make me some more of these things?”