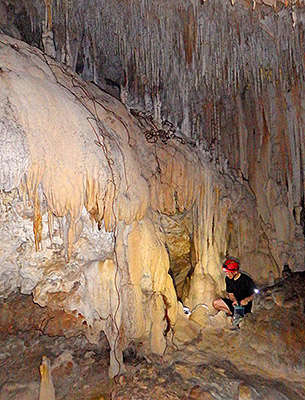 These large soft formations often form around the tree roots that drill down into the caves from the surface.

I brought six new units to cover attrition of the older drip sensors, but with only one failure in the last round, the scheduled replacements left us with several ‘old but still working’ loggers in hand.  With so many good stalagmite-forming records in the bag, we decided to look at some of the amorphous flow-stone draperies on the periphery of the cave. It will be interesting to see if we can develop a sense of how much these sources contribute to the water draining into the cave.

Although I had not yet determined if the Masons RH experiment was working, we decided to re-installed those multi-probe logger since they capture both temperature and barometric data, which is still very useful information for the project. 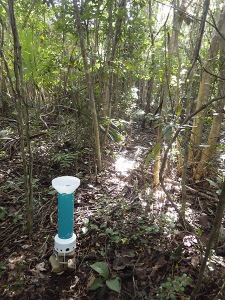 With a roof-top deployment nearby, we hope that comparisons with ground level units might provide some idea how much rain is evaporating before it even hits the ground…

With the success of the rain gauges, we decided to disperse those loggers to topside locations ranging as far as Tulum. I will build more for the next deployment, as we would eventually like to have surface rain gauges at all of our cave monitoring sites (precipitation is as relevant to the flow loggers as it is to the drip sensors!).  That’s a tall order, so I am happy that nearly all the units are delivering one-year or more operation on a set of batteries, so we no longer have to change them on every trip. As readers of this blog know, it’s been a long road bringing the project to the point where we can just leave the loggers in place if we run out of time, without loosing any data.

In all, there are now more than twenty five loggers in operation at Rio Secreto, which is the largest concentration of instruments we’ve ever had at one location. My hope is that the information we are gathering today helps to preserve their cave when the growing metropolis of Playa del Carmen reaches their doorstep. 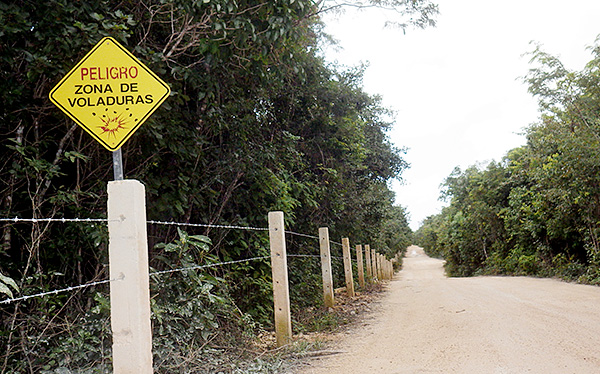 The road out to Rio Secreto skirts the boarder of the largest limestone quarry in the area. A dramatic example of the different perspectives you encounter about how the natural resources of Mexico should be utilized. Of course, as a Canadian, I see exactly the same issues playing out back home…