Now that we had all the flow sensors under water, the last big item on the to-do list was the installation at Rio Secreto. New memory cards brought all the 1st generation units down to a more reasonable 0.33 mA sleep current.  The new builds were even better, coming in around 0.22 mA, and they have 32k eeproms allowing them to buffer up to five days worth of data. Not wanting to risk too much on an untried idea, only three of the new builds are pin-powering the RTC, allowing them to get below 0.15 mA between drip counts. I have high hopes for this whole generation, and each has slightly different settings, to help me zero-in on an optimal approach to the eeprom buffering. 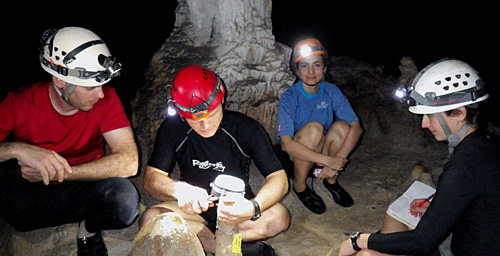 We were very happy to have other cave researchers join us for the day. It never hurts to have extra people on hand for the manual counts, because recording those initial drip rates the “old fashioned way” can take a substantial amount of time. It’s also good to have a fresh set of eyes on the installation, as I often miss things that are embarrassingly obvious while I juggle the low level details about each sensor in my head.  Being able to point out errors like that, with a sense of humor like Ben’s, is one of those vital fieldwork skills that never seems to make it onto the resume, but probably should. Of course, when you bring a bunch of karst researchers together in a beautiful system like Rio Secreto, the conversations start to sound a bit like this. (just substitute in the word “stal”)  I noticed a distinctly inverse relationship between our progress through the cave, and the number of syllables per second  😉

Aubri and Ben record drip intervals at a 3-unit cluster.

The first chamber (which we started calling Fernanda’s Lab) had a beautiful stalagmite garden on offer, and we tried to cluster drip sensors on actively growing stalagmites of different heights and shapes.  Understanding how drip dynamics and vadose zone chemistry contribute to stalagmite growth is something of a holy grail for my wife, as it underpins all the paleoclimate records that people derive from cave formations. Of course if figuring that out was easy, someone would have done it already.  So we set to work locating drips with the “right stuff”.  Five units ended up in the stall garden, with another cluster off at a more distant pool.  Units 04, 05 and 07 were replaced in their former locations with more robust anchoring this time, as these locations had been washed out by a high water event during the last deployment.

I put the new babies under a dry ledge to keep liquid water away from the humidity sensors.

The last data set gave us a gorgeous pressure & temperature record from the MS5803-02 and I continue to be impressed by sensors from Measurement Specialties.  This time round we had two pressure & RH sensors to deploy in the cave, but I have no idea if those HTU21d’s will survive such long exposure to the high humidity cave environment.  The  5bar pressure logger that we patched up with glue was going to be deployed on the surface, with a drip sensor beside it acting as a crude rain gauge so we can get a better sense of what the cave drips are responding to. By the end of the day we had fifteen instruments on site, making this our largest installation ever!