The drip sensor deployments left me with an couple of hours free time that evening, which gave me a chance to take a closer look at the flow sensors we pulled the day before. 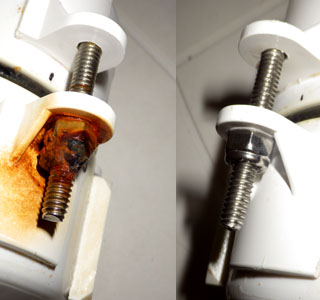 The most obvious impact of the near marine exposure was the rust that had accumulated on the stainless steel bolts and ballast washers. (no spec on the bolts, but the lock nuts were 18-8) While they fasteners were all purchased at the same time, they showed dramatic variation in the amount of oxidization they sustained. I can only presume these are the result of the manufacturing process leaving scratches which acted as nucleation sites. Even the fasteners that suffered significant oxidization remained secure and they were relatively easy to remove once the surface rust had been brushed away.

E-30CL still  clear, with nothing growing..

Some pitting on the JB weld surface. I had some concern that the iron particles in the J-B weld might induce galvanic corrosion on the other metal parts.

Both epoxies proved to be far more robust than the manufacturers testing indicated, with the Loctite showing some surface fogging on two units, while remaining perfectly clear on the other one. The grey JB marine weld changed from a smooth surface to one with significant grit (~400 grit sandpaper?). I suspect the pitting is a result of the iron particles in their formulation rusting out of the the matrix, and I will try to get these puppies under a microscope later.  The rubber 0-rings were still in pretty good shape although they had a significant layer of bacterial slime on the exposed surfaces which I cleared off with a touch of isopropl alcohol. I suspect that any material with suflur in it is a banquet for critters the low energy cave environment, but the O-rings certainly look like they will survive for at least a year. (something for me to keep in mind with the bungee anchors though, as the older one’s are at 9 months submersion now)

Three of the four units pulled their 6 x AA power supplies into the 3.3 volt range (as read by the Atmel internal 1.1 vref trick) ; more power drain than my earlier tests had indicated for a 5 month run. But those bench-top tests were done too fast to include self discharge, without isolation diodes, and the real world batteries had been exposed to a relatively high humidity for the duration. (I have added 10 gram desiccant packs to the current crop.)

Perhaps the most interesting power consumption result was from the one unit that included a voltage regulator in the power supply module. I was unable to measure the cell voltage directly till a few days after the units were disconnected, but after the rebound period the AA’s supplying the NCP1402-3.3V Step-Up regulator were at 1.35v, while identical cells that had powered the unregulated Tinyduinos were at 1.4 v.  That’s a pretty small difference given that the nominal efficiency of the regulator is around 75%.

I will have to analyze the rest of the data later because the little net-book I have with me doesn’t have the gumption to chew on data sets of nearly 34000 records. So now we have the three older model Cave Pearls (and a pressure sensor!) cleaned up and in working condition… I think it’s time to put some thought into our next experiment!